Planning to go to Minas de São Domingos for your next holiday? You will surely enjoy it!

If you want to visit South Portugal for your next holiday, enjoying bike tour and holidays in Minas de São Domingos is one of the best options you can choose. The abandoned mine resembles a post-apocalyptic landscape of abandoned buildings and blood-red puddles are worth a visit.

With its abandoned buildings, blood-red streams, and barren fields, a visit to this post-apocalyptic landscape of the abandoned São Domingo mine is a haunting experience. The best way to explore the amazing mining area is by joining our bike tour in Minas de São Domingos.

Minas de São Domingos is located in the parish of Corte do Pinto, municipality of Mértola, Beja District, Portugal.

The mines and each Minas de São Domingos village correspond to the old mine. They were connected to the maritime port of the river Pomarão on the Guadiana river by using the 15 km railroad, which is reduced by the São Domingos – Pomarão line.

Exploration of minerals at the São Domingos site preceded the Roman invasion of the Iberian Peninsula during that time as work intensified with the exploration of “iron hat” that covered the pyrite mass for exploration of copper, silver, and gold.

Location can be accessed freely at any time. There are ruins near the village. The more impressive part of the mine can be found further and can be reached by a bike tour Minas de São Domingos or hiking. Please consider that it can get very hot during the summer, so you should bring enough water.

With the end of mining, mining villages rot. This was the first village in the country that have electric lights.

Our bike tour Minas de São Domingos as we explained above, our bike holidays Algarve take care of everything from places to stay to good bikes, from moving your luggage along to hotel room. The payment is safe with us. Ride South Portugal offers the best bike rental and tour in the Algarve to help you to explore this beautiful region! You can also try a bike tour with joy and amazing landscape in southern Portugal 🙂

Freedom & flexibility. You can start your break on any day of the week and are welcome to add extra nights to the beginning or end of your stay, or along the way, if available. Our bike holidays Algarve can also give you useful tips for travel to and from your chosen destination.

We don’t underestimate the role of a comfortable, well-planned, meticulous itinerary through inspiring scenery. You can be as active or relaxed as you wish, visit the sights you want to see and enjoy every minute of your holiday.

All our biking and walking tours are graded as some routes offer more challenges than others.

We are pleased to offer electric bikes as an option on most of our bike tour Minas de São Domingos and also a range of single-center breaks – great for first-timers.

Back to the most stunning mines town in the Algarve. It‘s impossible to describe all about this unique town.

Here are the amazing places to visit while you’re enjoying a bike tour in Minas de São Domingos!

The discovery for those who came from Mértola on the N265 road was shocking: a vast area of ​​calm and clear water surrounded by shady trees and on one of the banks, a white-sand river beach. For swimming, summer starts on June 15 and ends on September 15, but this beach is a perfect place that must be visited all year round!

During the bathing season, the Municipality of Mértola organizes various entertainment activities aimed at tourists. Among the various activities, we recommend outdoor cinemas, beach libraries, and summer concerts. 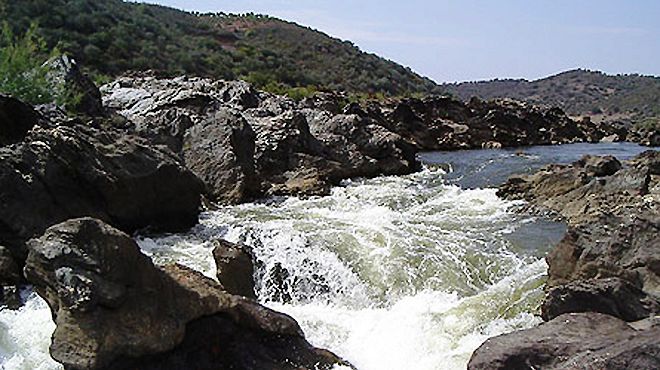 Located in the valley of the Guadiana River, winding through narrow river banks adorned by ancient waterwheels, or sharp ravines that are covered by Mediterranean shrubs, and offer beautiful landscape views. The Natural Park area also includes cities that exemplify well-preserved traditional architecture.

On the northern border of the Park, at a place of extraordinary natural beauty, you will find the steepest natural decline in the course of the Guadiana River, the waterfall at Pulo do Lobo (Wolf leap), which was given this name due to the proximity of the rocks on both sides, which gave the idea that it will be possible to cross the river in one bond. But don’t try – it’s a lot harder than it looks at first glance.

From many directions approaching Mértola, you will have an amazing view of the castle. Medieval castle stands on a hill with two towers – this fort was built in 1292 by the first master-builder from the Order of Santiago. Mértola Castle is located in an urban area on a hilltop, planted in a rocky landscape divided by the Guadiana River and Ribeira de Oeiras. Located nearby is a former Islamic mosque, converted into the Church of Nossa Senhora da Assunção. The irregular rectangular fort includes four towers: a rectangular support tower with a north-oriented angle, two square towers to the south, two rectangular towers to the south, two towers parallel to the main gate to the east and rectangular towers, with a circular effect. 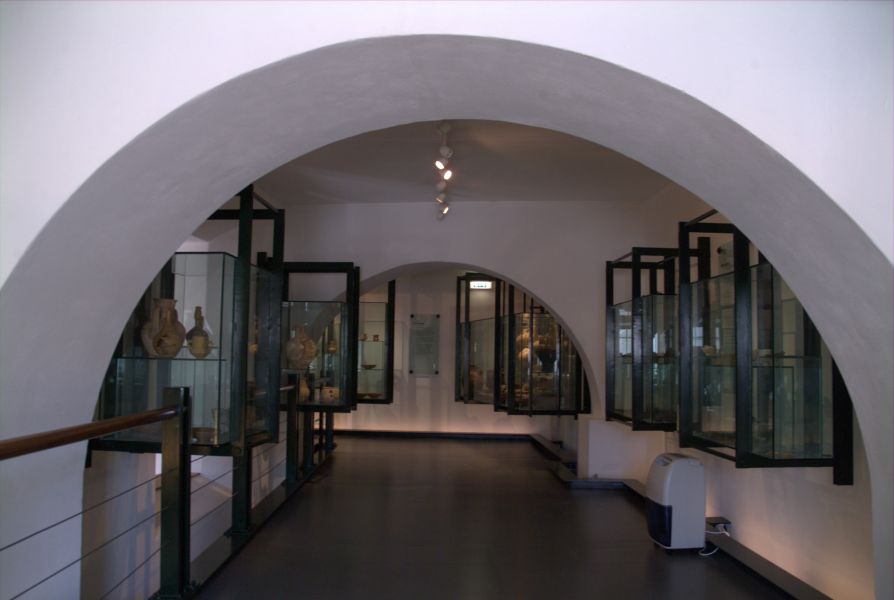 The Mértola Museum has as a geographical scope the whole county, having some of its nuclei located in archaeological sites representative of various periods of history, such as the Casa Romana, the Paleocristã Basilica or the S. Sebastião Chapel and Necropolis. The remaining nuclei bring together important archaeological material, such as the Islamic Art nucleus or the Castle Keep’s nucleus, as well as an important collection of Sacred Art from the 18th century. XV to XVIII and ethnographic materials representative of traditional arts such as the Forge of the Blacksmith and the Weaving Workshop, where three weavers are responsible for keeping this tradition alive. 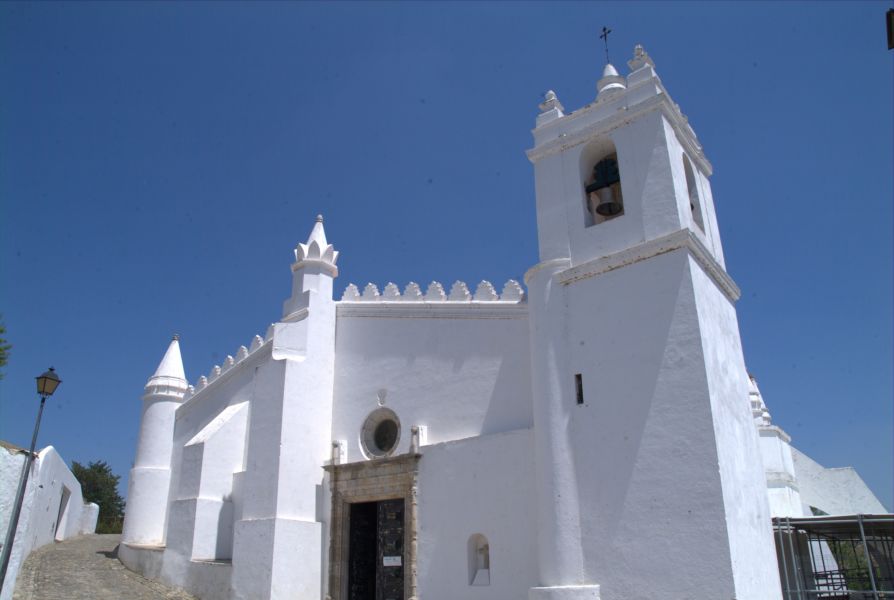 The Nossa Senhora da Anunciação Church is an 11th-century church and former mosque in the Mértola civil parish in the municipality of Mértola in Portuguese Alentejo. The church is located on an isolated hilltop, planted on a steep slope under Mértola Castle, but dominates the northern aspect of the city, on a terrace above the Guadiana River. The main facade lies along a road lined with walls, and near the Calvário Chapel.

The plan consists of large naves, rectangles, rectangular enclosures (in the north), pentagonal mihrab (in the east) and square bell towers (in the southeast) all covered by different tile roofs. The four facades are crowned by a staccato triangle, alternating along the lateral wall with a conical peak and a referenced merferon. The main facade, oriented at an angle to the south, one of the peaks acts as decoration and a cylindrical support (in the left corner), side by side with a prismatic bell tower with windows at the top and fogaréus at four corners.

The Vía Verde del Guadiana is well equipped, even for people with disabilities, especially recommended for hikers and cyclists, bike tour Minas de São Domingos is the best way to explore this area. the route runs between Mediterranean forest and streams that pour their waters into the river.

The Greenway begins in the mining village of La Isabel, belonging to the municipality of El Almendro. In the Km 7 is the crossing with the Way of the Limestones, near the Sardón Mining Village, with its Station, where the minerals from the wells next to it were weighed and loaded, and only the ruins of two buildings remain. Here is one of the rest areas of the route.

Further on the road reaches the Puente del Lobo, a Roman bridge with three semicircular arches, which allows you to enjoy beautiful panoramic views and rest, about 500 meters later, in a second rest area. The road continues until reaching the Sardón wind farm.

Those are the best things to do during your vacation in Minas de São Domingos, Portugal according to our bike holidays Algarve.

While most people only passed by, there are also plenty of day trips and things to do in Minas de São Domingos.

What are you waiting for? Book your bike tour in Minas de São Domingos and bike holidays around Algarve with us for an unforgettable trip.